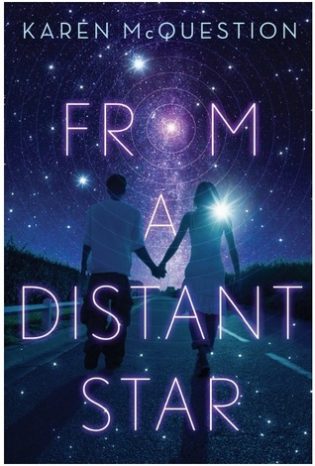 When Lucas Walker inexplicably recovers from a terminal illness, everyone is astonished --except for his girlfriend Emma, who never gave up hope. However, as friends and family celebrate the miracle, Emma becomes alarmed: Lucas has changed. He speaks haltingly, can't recall past events, and even his own dog doesn't recognize him. Emma begins to suspect something is terribly wrong. What happened to the Lucas she loved? Does his strange behavior have something to do with the shooting light that fell into Lucas's backyard the night he recovered?

As the two set off on a road trip in search of the truth, the journey takes an unexpected turn. First they're shot at by unknown enemies and then helped by unlikely allies. Before long, Emma and Lucas are plunged into a desperate life or death race against time.

Packed with intrigue and emotion, FROM A DISTANT STAR is a riveting novel about loyalty and the power of love.

From A Distant Star follows a girl named Emma and a boy named Scout.

Read Next  Half Bad by Sally Green | Review & GIVEAWAY!

Emma’s boyfriend Lucas has been sick with cancer for the longest time. She spends so much of her life sitting with him even though he can’t even do anything anymore. He’s always asleep, and everyone is pretty much waiting for him to wake up.

Scout, an alien, comes down to Earth one night and tries to fix Lucas though accidentally ends up taking over his body. He’s keeping Lucas alive, though he’s the one controlling the body. Everyone thinks that Lucas is suddenly healthy again, though it’s really just Scout.

I absolutely love books about aliens because they’re not something that I read often, so I really liked this one. Emma was a very sweet character, and she felt so much for Lucas, though Scout was definitely my favorite character.

I loved the way he talked, and it was incredible that he learned so much about the English language within a matter of days just by listening. I also thought it was very cool that he had so many powers.

I definitely found this book to be a satisfying read, and I think I’d check out more by Karen in the future!