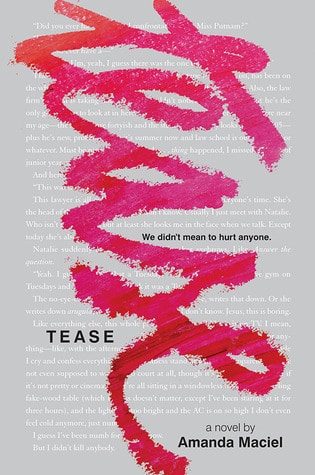 If you gulped through reading or streaming 13 Reasons Why, Tease is the book for you.

Emma Putnam is dead, and it's all Sara Wharton's fault. At least, that's what everyone seems to think. Sara, along with her best friend and three other classmates, has been criminally charged for the bullying and harassment that led to Emma's shocking suicide. Now Sara is the one who's ostracized, already guilty according to her peers, the community, and the media. In the summer before her senior year, in between meetings with lawyers and a court-recommended therapist, Sara is forced to reflect on the events that brought her to this moment—and ultimately consider her own role in an undeniable tragedy.

And she'll have to find a way to move forward, even when it feels like her own life is over.

I picked this book up just because I had never read a book on this topic before. It’s a very touchy topic to talk about, so I was really interested in this one.

Tease is about a girl named Sara who was involved with a suicide that happened at her school. Sara was best friends with this girl named Brielle, and together they were the most popular girls in their grade. Since Sara and Brielle had so much power in their grade from popularity, they could pretty much do anything that they wanted… including bullying.

When a new girl named Emma arrives at the school, she begins to get a reputation for hanging out with lots of guys, so everyone just assumes that she must date them all and do things with them, though there is no proof or evidence for this statement.

It starts going around school that Sara’s boyfriend, Dylan, and Emma are interested in each other, and Sara just absolutely can’t believe this. Since she can’t believe it, she and Brielle go out of their ways to call her “skank” and “slut” with every single chance that they’ve got.

They bully her to the point where she ends up committing suicide, and the book is about what happens after that.

Tease was told in two different time frames: what’s happening now in the present day and what’s happening in the past, before the suicide of Emma. In the before, Emma is bullied by Brielle and Sara, while in the now, Sara is going to summer school while going to see therapists for bullying as well as preparing for her court date.

Read Next  Waste of Space by Gina Damico | Review

The one thing that really bothered me about Sara was that she found it okay to call Emma all of these names just because she thought that since everyone thought these things about Emma it was okay for her to actually say them to her face.

Sara also was really hooked on popularity and didn’t want to disappoint Brielle, even when everything that Brielle does is not really okay. Sara would’ve been such a nice and genuine person had it not been for Brielle pushing her past her limits.

Sara also never really saw why what she did was wrong, saying that if Emma hadn’t killed herself then none of this mess would have been created. She was constantly blaming Emma for what happened even though she made Emma feel this way which caused her to kill herself in the first place.

It is not Emma’s fault for feeling the way that she did, it was Brielle’s and Sara’s and the rest of their friends. It may bother me, though at the same time we are seeing the story through the villain’s eyes, so we are not supposed to like Sara.

If you’re looking for a deep, interesting read through the eyes of the bully rather than the victim, I’d definitely pick this one up.